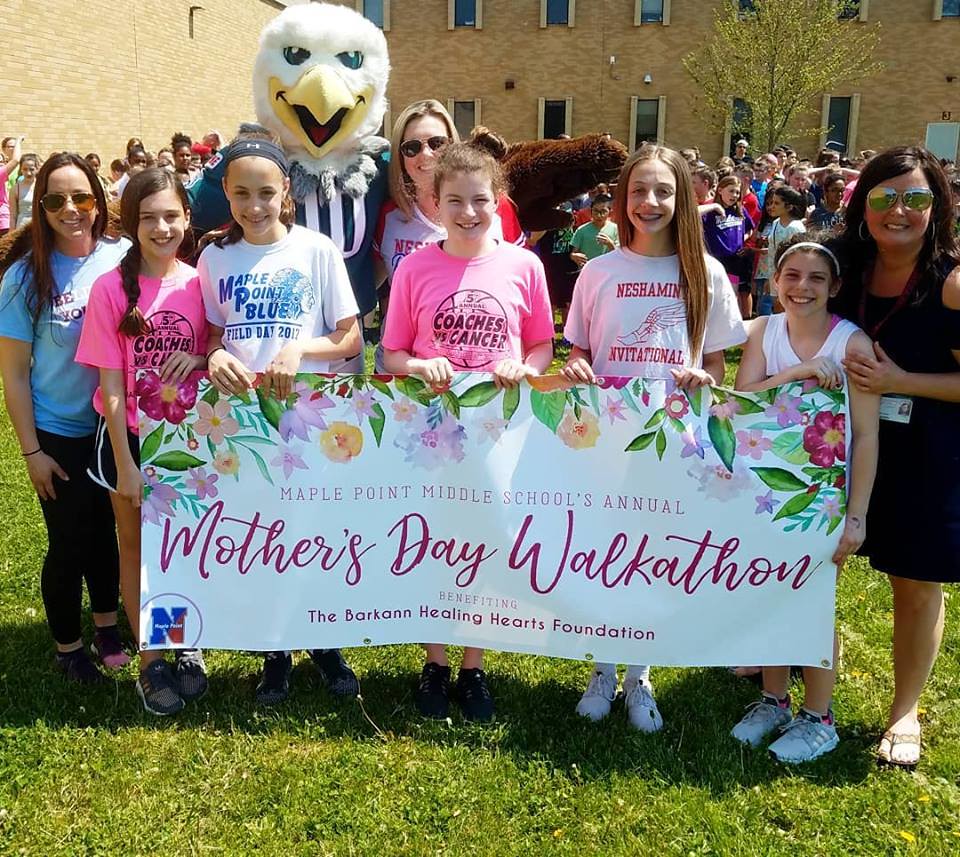 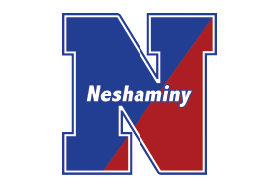 Parents/Guardians – click below to register by making a donation.

This is your chance to walk with your classmates on May 20th in support of some very special Mom’s who are in need at this time.

You will help make their Mother’s Day extra special by participating in the Walk-A-Thon.

With your Registration of $5.00 for the Walk, each student will receive a Soft Pretzel or Rita’s Water Ice and be eligible to win some great prizes such as Gift Cards to Amazon, Chick-Fa-La, Starbucks, 5 Below, Dick’s Sporting Goods, Chipotle, and Lululemon.

The Grand Prize for each Participant to win will be 2 Philadelphia 76ers Playoff Tickets.

Every $5.00 donation gives you another chance to win.  The more you donate, the more entries you will have to win these awesome prizes!

On Friday, May 20th we will pick 3 Winners from each grade (5th-8th) who will each receive (4) Phillies Tickets to a game in May or June at Citizens Bank Park.

Lastly, we would like to thank Mrs. Irizarry, Mrs. Negrotti, Mrs. Pinkstone, Mrs. Curran, Mr. O’Leary, Mrs. Bennett, Mrs. Merchiore, Mrs. McDonough, Mr. French, Mr. Sokol, and all of the teachers who have made this Walk such a huge success over the last 5 years.

And a Very Special Thank you to Dr. Rob McGee for having the Neshaminy School District  so engaged with The Barkann Foundation’s mission and for supporting countless other great local causes in our community throughout the year at Neshaminy.

The Maple Point Middle School Community is such a big part of our Healing Hearts Family.

We are so excited to see you all for the Mother’s Day-Walk-A-Thon on Friday, May 20th.

M is the mother of five children.

Her youngest child, currently age 12 months, had to be delivered prematurely at 28 weeks due to injuries M sustained due to a car accident in 2021.

A drug-impaired driver hit mother’s car on I-95, and although the driver is now incarcerated, mother continues to experience the trauma of the accident and its aftermath.

M previously worked in Home Care, but she has not yet been able to return to work following the accident, especially due to the demands of her youngest child’s care.

Despite her many challenges following the accident, including financial stressors, mother has been diligent in working to meet all of her children’s needs and keep her household stable.

Mother’s Day financial assistance would be especially welcome, and well deserved, at this point in time.

S is the mother of three children.

Most recently, her middle child has been hospitalized from Oct 2021 to the present date, with discharge planning underway.

S’s middle child requires intensive, around-the-clock supervision to protect her G-tube, as the child will frequently pull it out.

S has very few resources, financial or otherwise, and no reliable sources of support, and yet she never gives up on her medically involved child, no matter how demanding the care or how daunting the challenges.

Mom is now undergoing additional training on the inpatient unit in preparation for her child’s discharge.

She is her child’s tireless advocate.

Mom frequently states that her three children are her world, and she demonstrates this truth every day.

By Mother’s Day, her middle child is very likely to be home, and the gift of financial assistance will be more than welcome.

It will certainly relieve some stress for this family. 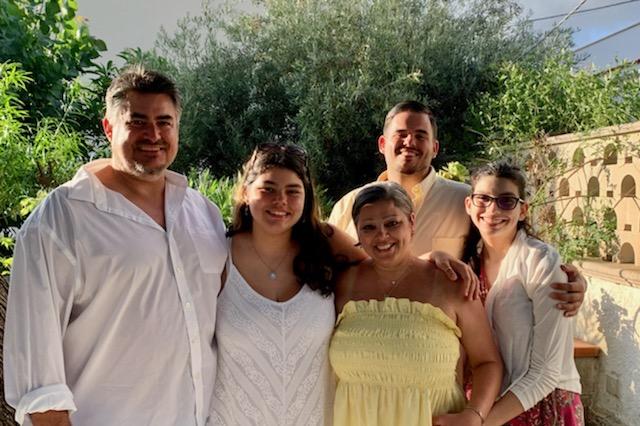 On Christmas Day my 15 year old daughter was too sick to even open her gifts, she had been sick for two weeks.

Too sick before Christmas to snoop. Not like her usual self. We had her tested for Covid after 5 days of a slight fever. Then a week later a call to the pediatrician, we figured it was a virus that needed to run its course, with a prescription given for her mucousy cough.

Christmas Day this normally healthy 15 year old, who just finished up fall soccer in early November, couldn’t even walk herself to the bathroom. Something was just not right. Even though it was Christmas, a trip to the local ER was what we decided was best. 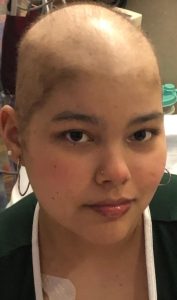 After arriving at our local emergency room and running some tests the ER doctor said that he was going to send us home and have us follow up with my daughter’s pediatrician in 2 days for further testing.

My daughter was still talking and we were laughing and taking selfies. I figured he knew best. Not even two minutes after he left the room he came back in and said he was going to do those tests now and not wait. So they drew more blood and we waited for the results.

We got some results. It appeared my daughter was very anemic.

So anemic that they were making arrangements for my daughter to be transported to the nearest children’s hospital of my choice, that night.

Knowing CHOP’s reputation, it was a no brainer. By ambulance though? The idea frightened me. Was she ok? But my dad had been anemic, it was something we could deal with, nothing to be frightened of.

As we waited for the ambulance from CHOP to pick us up, me and my husband decided that he would go home to be with our 17 year old daughter and I would go via ambulance with our 15 year old and call with updates.

The ride was scary, bumpy, dark and long, but nothing compared to what awaited us when the doors to the ED opened. Literally 10+ doctors, nurses and staff were awaiting our arrival. I was overwhelmed.

Why are there so many people waiting for my daughter?

She was only anemic. Is this how they welcomed every child that came through the doors? I told myself, yes. They were great though, and worked like a well oiled machine. Overwhelmed, I watched in fear and awe as teams of people worked on my daughter. Watching as skilled nurses placed lines in her veins, veins that were problematic for the numerous tests that needed to be run.

I felt we were in capable hands, but nothing prepared me for what I was about to hear. Perhaps this is what they mean when they say, “it’s like being hit by a mack truck”, right in the gut.

If I know one thing for sure, it’s that I never want to experience that feeling again.

It was an out of body experience and I will never forget the eyes behind the mask of the doctor who told me that my daughter has leukemia.

Never forget holding my daughters hand as my body shook uncontrollably as she so bravely comforted me and told me it was ok.

My daughter has leukemia.

It is hard to say, hard to write, hard to hear in my head that my daughter has acute myeloid leukemia.

She was immediately admitted and after meeting with the Oncology Team she started chemo within days.

She has had more transfusions of blood and platelets than we can count and was on oxygen for several days, nausea and vomiting out the wazoo, infections, physical therapy to walk again, etc.

This first round is only the beginning of our journey back to a healthy 15 year old.

The entire Community at Maple Point Middle School and The Barkann Foundation would like to ask that you rally around this wonderful family for The Mother’s Day Walk-A-Thon.

Dad is also a big part of our community, Mr. Devine is one of our favorite teachers at Maple Point Middle School.

“No One Fights Alone”!

We are in your corner every step of the way, Devine Family!

To register, make a $5.00 donation in the Student’s name, include their grade with their last name.

Parents – by making a donation you herby give the student registered permission to partipate in the Walk-A-Thon.

After making a $5.00 donation, the student will be placed into a daily drawing to win a wide variety of prizes!

*Remember… a $5 donation will register to the student to particpate.

Registered before? Log in to use your saved details.

If you registered an account, please enter your details below to login. If this is your first time, proceed to the donation form.